What are you looking for?

The most stunning views of Malaga's coastline

Monte Calamorro is a prime location from which to enjoy three panoramic lookout points, each with its own unique vantage point: the north offers a wide panorama of the Guadalhorce valley; the south affords a view of the African coast; to the east we find the Sierra Nevada; and from the west on a clear day, you can see all the way to Gibraltar. The clearly signposted trails cover a total distance of 2,750 metres, leading to the different lookout points and surrounded by a wide variety of typical Mediterranean scrubland plants, such as the zahareña, rockrose, thyme, iris and marjoram.

Located next to the upper cable car station, this is the place where most of Teleférico Benalmádena's activities take place. It's the best place to take your photos, combining a spectacular setting with cable car cabins in the background!

From here, you can see the towns of Benalmádena Costa and Arroyo de la Miel, as well as some of the most popular tourist attractions, including the beaches of Puerto Marina, the Parque de la Paloma and Selwo Marina, home of the only dolphinarium and penguinarium in Andalusia.

Nearby are the stands where the bird-of-prey flying presentation run by the Valle de las Águilas Foundation takes place and where you can discover the marvellous world of falconry, an ancient art that has been designated Immaterial Cultural Heritage by UNESCO.

Furthermore, next to the lookout is the La Cima Restaurant, which has an indoor lounge and outdoor terrace and from which you can enjoy a breathtaking panoramic view while you relax with a drink in the highest restaurant with the best views of Benalmádena. If you are looking for a place to stop for a drink during your visit, you are in luck, as the whole family will find something to enjoy from its varied menu! 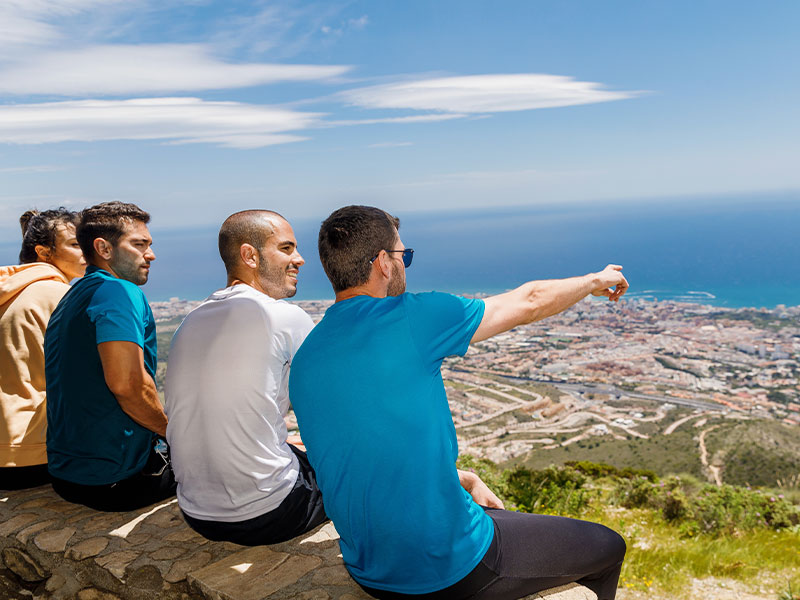 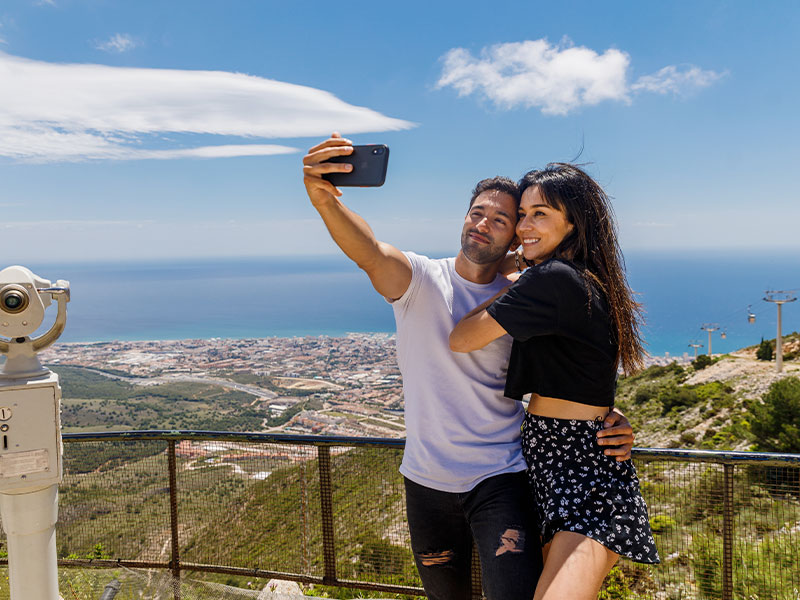 The trail connecting the arrival station with the Southern Lookout is an easy one that is suitable for everyone! This lookout offers a full panorama of the coastline of Malaga province, starting with the Costa del Sol. From this lookout point, which has a large shaded area, you can also see the Sierra Nevada and its snow-capped mountains, the more than eight kilometres of beaches at Fuengirola and, on a clear day, even the rock of Gibraltar. Don't miss the chance to enjoy these spectacular views!

Did you know that the term "Costa del Sol" was coined in the early 20th century by Rodolfo Lussnigg in order to promote Almeria's coastline? Indeed, its sunny climate prevails at almost all times of the year, so it's no wonder that it is one of Spain's most important tourist areas, accounting for around 35% of Andalusian tourism!

The moderately difficult trail that leads to the Northern Lookout offers spectacular panoramic views of the Mijas mountain range, which separates the western Costa del Sol from the Guadalhorce Valley, along with views of the towns of Torremolinos, Benalmádena, Mijas, Alhaurín de la Torre, Alhaurín el Grande and the Malaga district of Churriana.

The highest point is Mijas peak, with an altitude of nothing less than 1,150 metres.. However, there are others, such as Puerto Málaga, Jabalcuza, Jarapalos and the Cerro del Moro, on which you can see the telecommunications station that serves the city of Malaga and most of the province.

From this lookout point you have a view of the northern part of Malaga province. It will leave you speechless! You can also see the Guadalhorce Valley, one of Malaga's nine regions. This natural area formed by the river that gives it its name is characterised by its fertility and the cultivation of vegetables, fruit trees and citrus fruit, which is why it is known as "Malaga's market garden". 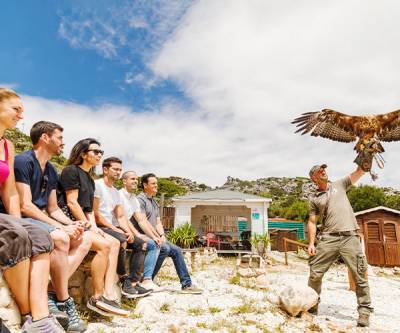 Presentation of birds of prey at the summit

Presentation of birds of prey at the summit